Casino Figueira took in last friday, May 22nd, the Figueira Film Art 2015 Ball. More than two hundred people took the invitation and shared the start of the second edition of the new film festival in Figueira da Foz, which will take place until September 13th. 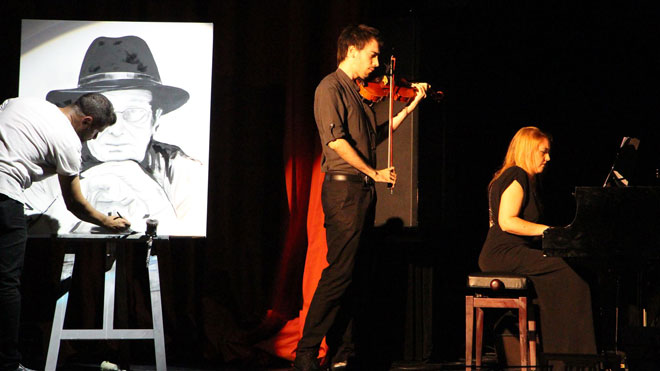 In a night of celebrating the 7th Art, what reigned was music – by the CAE Orchestra, the Filarmónica Artística Pombalense, the Conservatório de Música David de Sousa, Cristina Loureiro, António Ataíde, Gonçalo Sousa, Alexandra Curado, Susana Jorge e Joana Rascão -; the graphic arts, with Rui Ferreira, the artist who showed aerography to the country in the show Got Talent Portugal; and friendship. This last one spoke louder with the conference it assembled, in a conversation guided by the Culture representative António Tavares with three friends of the late director Manoel de Oliveira, who will be honored in this second edition of Figueira Film Art. “This won’t be a posthumous homage, because it was announced while Manoel de Oliveira lived, and because to us he is, through his work, still very much alive”, said Bruno Manique, of the event’s organization board.