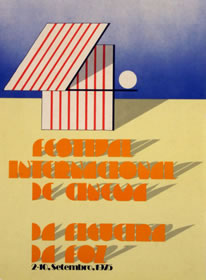 The first edition of the Figueira da Foz International Film Festival (FICFF) took place in 1972. This event, that for three decades brought in cinephiles from all over the country and also from abroad, was the most important film festival in Portugal, with films from a great variety of cinematographies, mainly the ones that were rarely broadcasted in the portuguese commercial circuit.
It was born from the will of a group of cinephiles, in which José Vieira Marques stood out and was, from the start, the group’s only director. Born in Vila Franca de Xira on February 28th 1934, José Vieira Marques, who at point was a priest, led the Figueira da Foz International Film Festival until 2002, the year of the 31st and last edition, and has lived in Setúbal since 2003.
The Festival took place mostly in the movie theatres of the Figueira da Foz Casino, although some screenings spread to other places in the city, such as the Grupo Caras Direitas’ salon in Buarcos, and the auditorium of the Dr. Santos Rocha Museum.

Throughout the years, the following awards, among others, were given: